Also known as the Ridge Coral and the Jasmine Coral, this eye-catching coral is a relatively rare light green or brownish pink coral. Colonies of this type of coral form long valleys with separate walls. These walls are generally thin and look like a ridge. Over time, and in the right conditions, the polyps will grow exponentially. 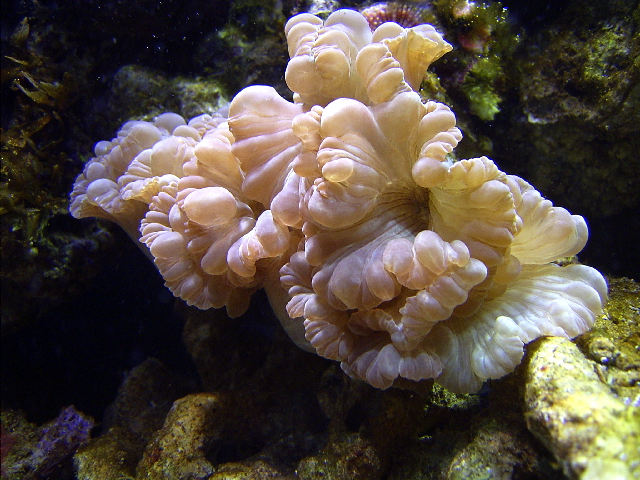 In its natural environment, the Fox Coral is usually found under overhangs and in sheltered environments in calmer, turbid waters. Their ruffled polyps are large and striated and spread into shapes that resemble flowers. Because of this shape, these types of corals are often mistaken for anemones.

Feeding tentacles have not been observed in the Fox Coral, and it is therefore widely believed that these corals mostly derive their nutrition from absorbing nutrients from the water. Like many other coral types, this coral has a symbiotic relationship with zooxanthellae, a type of marine algae.
This type of coral could subsist on absorbing nutrients if the environment is more turbid in the aquarium. To achieve this, don’t skim too aggressively and use less filtration.

These corals derive nutrition from the water, so you don’t need to feed them. This is why they are considered some of the easiest corals to care for. Fox Corals do well in mild conditions. They require low to medium levels of indirect light and also low water movement. It is easy to frag Fox Corals by using a pair of scissors to cut their skeletal, corrugated bodies. They regenerate tissue quicker than any other member of this particular coral family. 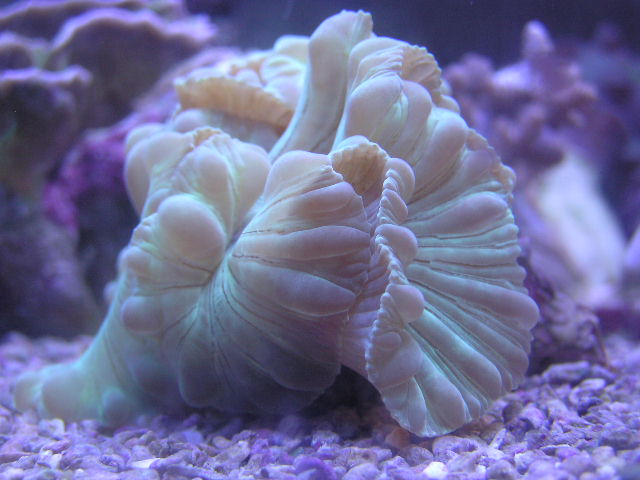 This type of coral is super easy to care for and is not prone to many diseases or problems. The only infection these corals may succumb to is brown jelly, which is exactly what it sounds like. This is caused by poor water conditions and/or damage to the coral’s tissue. Another potential issue is water conditions. One area to watch out for is light. Should the Fox Coral be kept in a light brighter than low-to-medium indirect light, they could turn brown. If you keep the coral with others that require brighter light conditions, place it under an overhang to prevent this from happening. Another potential issue is water flow.

This type of coral is not aggressive. They are pretty to look at and easy to live with; they don’t sting and rarely get stung by other more temperamental corals. The only issue of compatibility could stem from needing different water conditions for other marine creatures. Because the Fox Coral needs low water movement, it won’t be able to remain together with small polyp stony corals or other marine creatures that require more turbulent conditions to thrive.

The Fox Coral is both male and female and can reproduce sexually and asexually. To reproduce sexually, the corals release eggs and sperm at the same time. This creates a fertilized egg that begins swimming around. It eventually settles and forms a little polyp, which develops into a coral.